Pacific Cup Punta Mita vs. Del Mar / The Bridges May 2019

This was our 2nd Match on the road with a Punta Mita team made up of : Kevin Hollern, Chuck Latham , Ron Budazc , John McIntyre , Luis Ituarte, Marcelo Lopez, Mark Campbell & myself to be played over 3 rounds 2 at Del Mar Country Club and one at the Bridges. Day one began with a lunch at Del Mar Country Club with special guest David Stockton Sr former Ryder Cup Captain & holder of the most rounds of golf without a 3 putt : 984 rounds. The results after day 1 on a cool, windy & shallenging Del Mar course was 36 ½ points Punta Mita 35 ½ points Del Mar. Del Mar Captains Matt & Alberto had chosen the format , made up the 2 somes in both teams and were definitely planning on hammering the Punta Mita team after their loss in Punta Mita in 2018.  The format was to be 18 points per match : best ball low ball, 2nd lowest ball and if still drawn points halved so a real duo match.

Day 2 at the beautiful The Bridges saw Punta Mita 2 somes of  Ituarte / Budazc ; Emberson / Hollern, Lopez / McIntyre & Campbell / Latham. The greens had been recently poked making them somewhat slow however we had a great chance to experience this unique Canyon like layout in beautiful surroundings of Orange groves and vineyards. Campball / Latham halved their match , Emberson Hollern won by 1 closing out on the 18th , while McIntrye & Lopez suffered defeat leaving it up to Ituarte / Budacz who inflicted a huge defeat on Matt Browar and partner to leave Punta Mita with a 6 point win and going into day 3 back at Del Mar with a 6 point advantage leading by 75 points to 69 points.

Special shot of the day prices were won by J Mc for a nigh Albatross, closest to the Pins by Chuck Latham

Del Mar Captain Matt Browar made a few shuffles to the team for the 3rd day of the Cup looking to remain in the hands of the temible Men in Blue !! Double points were on the table for the final day back at Del Mar with Punta Mita teaming up with the following pairs : Campbell / Emberson , Latham / Hollern , Budazc / McIntyre , Lopez Ituarte – despite Campbell and Emberson team suffering a 5 point loss to Del Mars No 1 player Alberto Michan who did not lose any of his 3 matches the rest of the Punta Mita team battled on for what was in the end a comfortable victory for the Punta Mita team. Well done guys !! Punta Mita leads this series 2 – 0 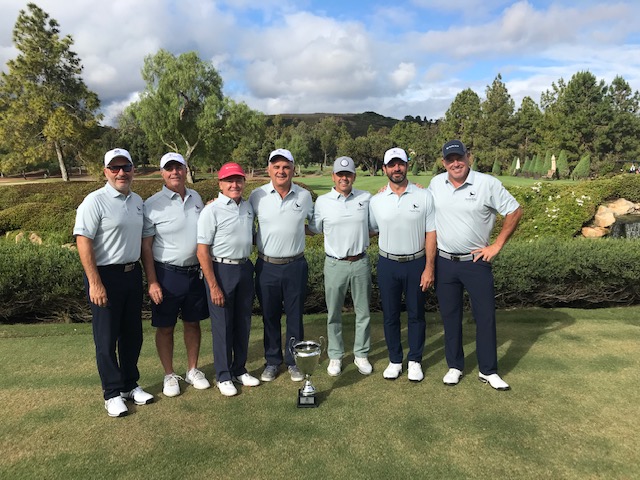 Punta Mita won each day and with double points in play on day 3 to give Del Mar a chance further extended their lead and final victory by a comfortable margin. The Hammer specialists from San Diego were soundly defeated