A return trip to Calgary & Canada 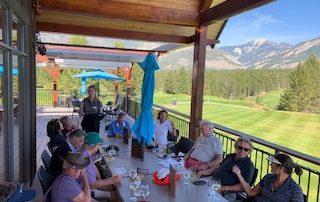 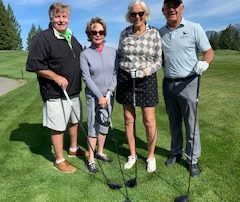 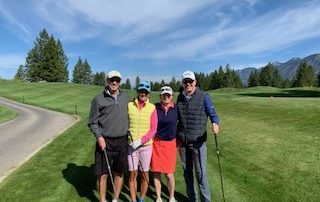 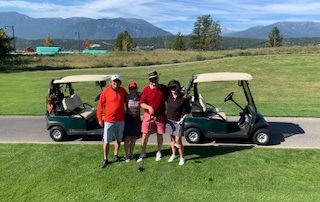 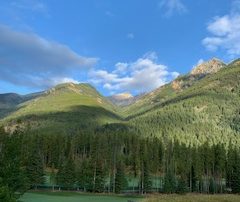 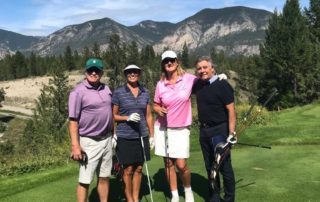 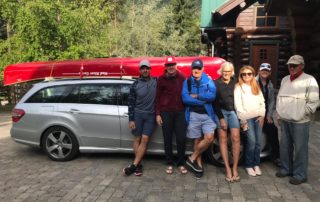 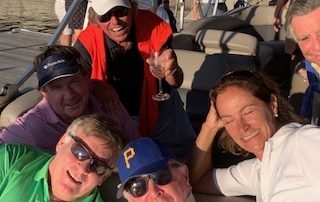 It was a couple of years ago that we visited Robert & Tania Ritchie at their home in Panorama – a trip of which we have very fond memories. Well , believe it or not we must have behaved well enough to be invited back !! The trip began with a couple of days in Calgary which included a Punta Mita cocktail , Golf & Dinner with our dear friends the McGregors which included catching up with another dear friend Neil Manning who came into town for the Punta Mita reunion.
Then it was up to Panorama accompanied on this occasion by Roberto & Patricia Santa Cruz and my wing man Marcelo Lopez for a few days in one of my favourite spots on this earth : Panorama !! The Ritchie hospitality, the food, the golf, the cabin, the setting all make this space so special. My golf began with a very solid 79 on a day that “could have been so much lower” followed by rounds of 82’s. Gordo Ritchie joined the Hockey Sticks Club with a great 77 on day 2 – well done mate and always good to see the neighbouring Ritchies in Panorama as well. The paddle down the Colombia river of 18Ks seems to have a negative impact on my golf swing – that being said it was a beautiful paddle with noteworthy contributions by Marcelo & Patricia. The Picnic a la Tania was delicious ! All in all another sublime few days in Panorama – heartfelt thanks to our dear friends the Ritchies R&T – especially all the effort made at a very trying moment for them both.
It was a 57 birthday Celebration to me remember – thank you Sabine for making it so special and Tania for all you did to make it so memorable.
Followed by 20 Punta Mita Amigos in Canada
At the Eagle Ranch Golf Course, Invermere in Canada a group of 20 Punta Mita residents participated in The 20 Amigos Golf Tournament on a beautiful sunny day of this Top 50 ranked Golf Course in Canada. The Golf event was organized by Tania & Robyn Ritchie in what was a fun four ball format ( known as 5/8/5) with the eventual winners being the Foursome of Robyn Ritchie , Larry Merrick, Patricia Vergara & Roberto Santa Cruz with a Total score of 13 under. Closest to the Pin was Larry Merrick while Ladies Long drive went to Jan McCaffery with the men’s long drive to Carl Emberson.
Visiting from out of town for the occasion were Larry & Yvonne Bowlen, Brian & Barbara Williams, Roberto Santa Cruz & Patricia Vergara and Carl & Sabine Emberson while the Canadian Amigos included Gord & Robyn Ritchie; Bernie & Jan McCaffery; Brian & Stephanie Felesky; John & Sheilagh Languille, Tania & Rob Ritchie
Golf was followed by a wonderful tour of Invermere Lake hosted by Brian Filesky with lakeside beverages followed by a delicious dinner co-hosted by Languilles and their lakeside neighbours the Fliesky’s on Invermere Lake including a special fireworks display for the #VivaPuntaMita moment of the evening.
The 20 Amigos event culminated a number of coincidental Punta Mita Amigos events in Canada from the Taste of Punta Mita event at Deane House hosted by Punta Mita fan and renowned local restauranteur Sal Howell in Calgary last week with over 40 Punta Mita amigos present ; Golf at The Calgary Country Club hosted by Stewart McGregor, Punta Mita friends up in Panorama chez The Ritchies ( Gordon & Robyn / Robert & Tania) with Golf on Greywolf Golf Course ranked No.5 in Canada.
Just wonderful to see that special Punta Mita magic so alive and well. This scribe thanks all the Canadians for such warm hospitality and share some images with fellow Club members