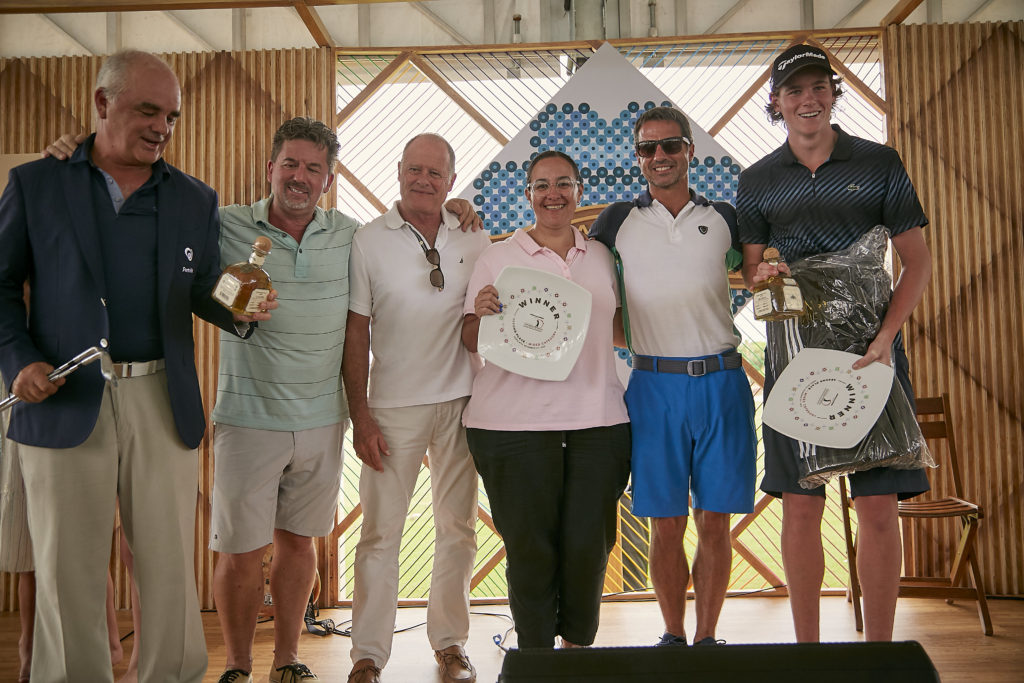 I was born into a family where we lived and breathed golf 24/7. My father, a great man, was and is still renowned as the best amateur golf player in Mexico’s history . Dad aka Juan Antonio Estrada, participated in the Masters 3 times on a special invite by Bobby Jones in 1962, 1963 & 1964. He won every conceivable Amateur tournament in Mexico and around the world. He was indeed a great player but he was an even better person.

I have 3 sisters and 1 brother – it was my brother who had more opportunities in golf then myself and my sisters and when I was young  not many girls were playing in Mexico. To make matters worse I was left-handed so finding  teacher was even harder. In the end I decided to play golf right handed.

I played competitive golf for a few years when I was a teenager as well as tournaments at my club, the Churubusco. The truth of the matter is I never really got the golf bug where all one wants is to play, read, watch golf day in day out. I was happy shooting a round in the 80’s or 90’s no big deal I did not worry.

Life’s journey forced us to leave the club, to stop playing and to become spectators due to Dad’s declining health and the fact we were faced with financial problems all at the same time. The whole family had to focus on working and moving forward.

Some 12 Years later the family decided to return to golf. We started to play  as a family on the weekends in Vallescondido with Dad who had suffered 3 strokes and could not walk very well but something magical would happen to him on the Golf Course. He would get up from the wheelchair, helped by my brother stand on the tee of the Par 3s  and magically managed hit him. They were very happy years.

Since that day I had not lifted a golf club in my hands, I never played again. It was very painful. And stepping on a golf course meant crying uncontrollably.

But this year was different, with the possibility of playing in Punta Mita at The Gourmet & Golf event , I asked myself  what my dad would say. And only his words came to me: «Chela, play, no matter if you play well or badly, you rarely have the opportunity to play on such great courses as that.» And so I decided to play.

I was full of nerves, fear and anguish – along with a terrible handicap and not having hit a golf ball in 4 years – I could not sleep  during the days prior to the event.

The day to play arrived and without knowing anyone I was full of fear and insecurity. I arrived to the driving range on what was a beautiful warm morning & hit a couple of balls and everything began to flow. I felt less nervous but my hands were shaking. I just happened to know my partner Lucas a young 16 year old boy from Mexico City. It could not be more perfect. My father spent many years with children in Golf and he always told us that the kids were the future and he loved being with the «golf kids». My house, when I was a girl, was always full of kids who were there to listen to Dad’s stories and advice.

On the second day of play I landed in every bunker in Punta Mita. Dad would always say Golf is much like life full of bunkers we had to get out of  with the fear of failing. And how many fears I overcome that day in Punta Mita. The most beautiful of all, is that Lucas, my partner always had advice, a word of encouragement, a touch on my shoulder and “lets go “

I can not really describe everything that went through my heart over those 2 days in Punta Mita. I connected with my dad and his legacy. I could not have imagined a more perfect scenario to remember and honor my dad. The spectacular courses, the amazing views of the pacific ocean , beautiful sunny days , Lucas the best partner, and the support of Carl, Vero, Horacio, Santi and Vero Hdz who were there sharing this moment with me.

Winning the Mixed Division with Lucas as well as ¨the closest to the pin¨, were the icing on the cake. The result was not something that really concerned me what was really important for me was to play Golf again. I think everything just fell into place that weekend in Punta Mita and as I have come to know in golf there is always some factor of luck or getting the right bounce. I certainly played with all my heart those 2 days .

I can only thank everyone, you, Vero G, Horacio, Caty, Vero H and Punta Mita for leaving a mark in my life and a moment I will never forget.